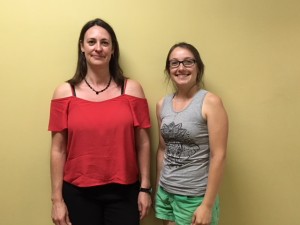 Priscilla Gareau, co-founder and CEO –
Project Manager Dr. Gareau holds a BA in Biology, as well as a Masters and PhD in Environmental Science from the University of Quebec in Montreal. Dr. Priscilla Gareau has nearly twenty years of experience in environmental project management and science popularization, eight years of experience in academic research, and three years of university teaching. Alternately manager of environmental groups and researcher at UQAM, author of thirty articles, reports and scientific papers, Priscilla Gareau has developed extensive expertise in managing ecosystems. Since 2001, Dr. Priscilla Gareau led three projects for the protection of endangered species. From 2001 to 2004, she led the “Protecting the habitat of the wood turtle in the watershed of the Shawinigan River” project under the direction of the Mouvement Vert Mauricie. Since 2009, she has headed the project to protect channel darters and eastern sand darters in the watersheds of the English and Trout Rivers. She is also a member of the restoration team on cyprinids and small perch in Quebec.

Julie Tremblay, Assistant to the projects director
Graduate of the University of Sherbrooke, Ms. Tremblay holds a Bachelor of Ecological. Ms. Tremblay has experience in wildlife and plant inventories as well as in characterization of natural environments, particularly at riparian strips and forest areas. She has also participated in restoration and wildlife management projects.

David Lemieux- Bibeau, Forest Engineer
Graduate of Laval University, Mr. Lemieux-Bibeau holds a BA in Forest Management and Environment and is a member of the Order of Forestry Engineers of Quebec. Head of the Flore Vasculaire Committee of Quebec – Montreal, of the FloraQuebeca Association, Mr. Lemieux-Bibeau is an amateur botanist. He has experience conducting inventories for endangered species and plants in southern forests. An independent forester since November 2009, he has worked in private forests and helped with the development of private forest programs. He has been a consultant for Ambioterra since 2009 as part of their voluntary conservation projects (characterization of forest environments).

***We also employ diverse specialists who participate in individual projects as needed.